The numbers are horrific. The optics are plain dreadful. Hollywood’s neglect of Latino contributors is simply put: appalling. We have recently covered the gross negligence of Latino writers in the news media, particularly at the L.A. Times, a daily newspaper that serves the city with the most Latinos in the country (representing half of their population), yet still remains utterly tone deaf to why representation matters on their masthead.

Now, UCLA released the second half of their 2020 Hollywood Diversity Report, which focuses on Television data. Looks like television networks and studios are just as tone deaf  on Latinx representation as The L.A. Times.

In the report, the statistical measurements show Latinos are still the MOST disproportionately underrepresented group on television. Although there have been slight improvements, these numbers do not reflect the population of America, where Latinos are 19% of the population. In fact, they are so far off from aligning with the actual demographical make-up of this country that it begs the questions. Do they like us? Do they even get us?

“Without a doubt, the numbers for Latinos in our study are the most severe of all groups when it comes to representation compared to population,” Dr. Ana-Christina Ramón, coauthor of the study, explains. “Hollywood sees Latinos as more foreign, more ‘other’ than anyone else, rather than being able to see us as just  one kind of default American. But what they also fail to understand, is U.S. Latinos don’t just want Latino stories that pander to them. We want stories that feature us marketing to everyone. If everyone isn’t talking about it, we won’t be interested.”

Latinos won’t be interested because Hollywood keeps us insulated, separated, and because of our ambicutlural dynamics, we are often misunderstood. Having such few Latinos in writer’s rooms (around 4-5%) does not help.

We keep asking for change. We still aren’t seeing jack. Yet the solution is simple. Let us tell our stories. Give us a platform, you got plenty. “You” being the Hollywood heads. And when we get the platform, don’t force us to pander to the most played out, superficial portrayals of our people. Let us show ourselves in a powerful light, because we are powerful people. It’ll be good for everyone, we swear. That’s not a veiled threat, it’s a promise.

But all we keep getting for an answer from every major studio and network’s now proverbial, and pedantic, Inclusivity Office Director are empty promises and more of the same old lip service. Thanks for the kind words Mr. and Mrs. Hollywood Establishment. Now where are the opportunities?

“We have been reaching out to studios since we began publishing the study in 2014. They have been more responsive in the last couple of years. Before we were sort of sidelined with the Diversity Offices that were created mostly after the studio system signed on to Memorandum of Understanding in 1999, which was pushed by several advocacy groups, including the NAACP. The reality is we can’t approach this problem with supplemental positions with people who are not the ones making the decisions on what shows and what talent to greenlight. We have started to connect more with the creative and business side of the industry. We need them to understand the issue more. It has to come from the top. It has to be followed through and invested in. And while we are improving slightly, as our stats show, we still have a long way to go,” Dr. Ramón says.

Despite the tilted representation of Latinos as “takers” thanks to news stories that focus on illegal immigration and its impact on things like taxes and public services, the reality is Latinos in America as a whole take back less and put in more than just about anyone else at this point. Straight up. And when you are a group as large as Latinos are in the United States, and you see yourself so little in the fabric that makes up the culture of this country, specifically news media and entertainment, how can you not feel like you’re getting mad jipped?

Let’s look at the numbers. According to the study, among cable scripted leads for the 2018-19 television season: 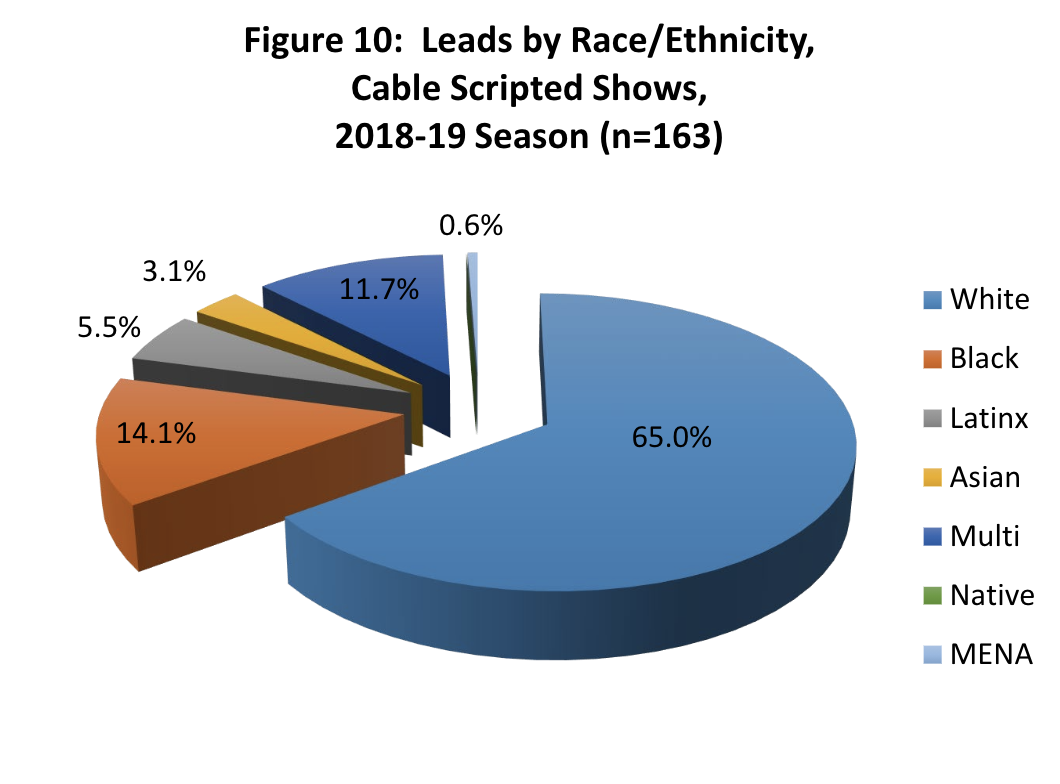 The Hollywood Diversity Report is a product of the Division of Social Sciences in the UCLA College. Its authors are Dr. Darnell Hunt, dean of social sciences and Dr. Ana-Christina Ramón, director of research and civic engagement of the Division of Social Sciences. For the full report, which includes information on studio executives, show creators, show directors, and writers as well as ratings, Emmy accolades and social media engagement for shows in the last two seasons, visit https://socialsciences.ucla.edu/hollywood-diversity-report-2020/
#RepresentationMatters